Very beautiful mild day. To College 8:30 to 12. To Country with Father and H.H. Planted corn, potatoes, peas, etc. Home. Chored around in P.M. John and Anna here. Aeroplanes performed over city all P.M. in connection with Liberty Loan. Took bath. To bed.

**********
Here is some information I found on the internet about Liberty Loans:

These loans were made to help finance the war effort. Here is more information about how the government sold the idea to the public:


Campaigns of education were inaugurated making widely known the causes of the war, the object sought by victory, and the necessity of financing the Allies and supporting the military arm of the Government. To the thoroughness of the educational campaign may be attributed much of the success of the issues. It convinced everyone that each man, woman and child must " do his bit." It made an army of workers with an individual responsibility. No device to assemble crowds was ignored, and there was no assembly without its speakers. Bands, processions, parades, balloon ascensions, flights of aeroplanes dropping leaflets, steeple climbers, altars of liberty, " Nation Days " for aliens and citizens of foreign birth, and, later, captured tanks, cannon and submarines, pyramids of German helmets - all were used. Walls were covered with special cartoons; magazines and newspapers contained full pages of advertising.

Posted by Cheryl at 6:38 PM No comments:

Bright day. To college 8:30-2:30. Down town. Bowled at Morse, ducks and big pins. To Mission Study Class 7:8 P.M. To Armory for drill. To Charge of Company for ten minutes.

**********
I guess Stanford got to be in charge of his ROTC company for a brief spell. He doesn't mention how it went, but he was probably successful, considering the leadership skills he showed later in his life.
Posted by Cheryl at 6:25 PM No comments:

Bright and fair in morning. Turned to rain in afternoon. To college 8:30 to 12. Father and Uncle John to country to make garden. Home in P.M. K.S.P. meeting at Y.M.C.A. Initiation of Merlin Finch. Bowled at Star. To bed 12 P.M.

**********
You don't hear about duckpin bowling much anymore, but I think it was popular in earlier times. My father was a fan. Here is the link to a Wikipedia article on the subject: Ducks. 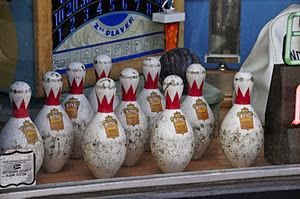 Posted by Cheryl at 6:19 PM No comments:

Allison-Foote Prizes. Mr. George F. Allison, of New York city,
and the late Wallace T. Foote, of Port Henry, N. Y., founded a
prize for the encouragement of debate in the literary societies.
The prize consists of $100 in cash, and is awarded as the result of
a public competition between representatives of the Adelphic and
Philomathean Literary Societies. Fifty dollars is awarded to the
society presenting the strongest argument. The remaining $50 is
awarded to the debater who makes the best single speech, regard-
less of his society relations. Contestants must have engaged in at
least ten debates in their respective societies during the college
year immediately preceding. All further details are left to the
determination of a committee, consisting of the president, the
dean of the college, and the professor of Rhetoric.

I was unable to locate any information on Mr. Swart, who apparently presented the best single speech.
Posted by Cheryl at 6:13 PM No comments:

**********
Not sure who Smith is--it's probably a man because women are always referred to by their given names.
Posted by Cheryl at 5:58 PM No comments:

**********
I looked up Gray and Albany Roads on the map, but found only Gray and Albany Streets, and they are pretty far apart. So, I'm not sure where Stanford and pals walked.
Posted by Cheryl at 5:56 PM No comments: 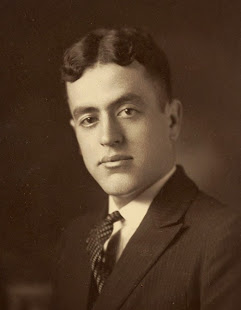 I've created this blog to make a record of the hand-written journals of Stanford Stillman Closson (1900-1982), who was in his life a Methodist Minister, grandfather, father, brother, husband and son. I'm starting with the first one, written in 1919, but I plan to record subsequent years (they continue into the 1970s). I'm matching the days--May 5, 1919 to May 5, 2013, for instance--with one entry per day. So it will take a year to get through the first diary.
The daily entries are pretty short, though, so in addition to recording the diaries, I'm also annotating them, giving additional information about the people, places and events mentioned by Stanford. By doing this, I hope to convey a sense of 1919 Schenectady, New York and the people Stanford interacted with. Of course, I'm also hoping to give Stanford's descendants a fuller picture of who he was as a young man.

A Note about the Original Text

For the most part, I'm transcribing Stanford's words as they appear in the original Date Book, keeping the same spelling, punctuation and capitalization, except for the rare occasions when I believe the original might cause confusion. In those cases I have added an explanation, in brackets or in the annotation following the diary entry .